The Northampton Historical Society was established in November of 1967 and incorportated as a non-profit organization 501-C(3) on August 9th1968. The incorporation founding members were: William H McGaughey, Paul L Stephens Sr., Maria Abbe, Carrie K Swain, Alson E Prior. The statutory agent was Ione H Hoffman. The aim of the society "To collect, preserve the records and articles of interest, histories, and serve the community at large with information, programs and exhibits on the Northampton Township."

As of November 2009 Three hundred and fifteen programs (315) were given to the public at monthly meetings at the Northampton Town Hall 853 West Bath Rd. Please note! The Town Hall is closed for repairs. Until further notice, watch meeting annoucements for location. Meetings are the 4th Monday of January through April, September & October. May & November are the 3rd Monday due to holidays. June is usually a a field trip - time and location TBA. July & August, no meeting. Doors open 5:30 for social time and business meeting. There is no meeting in December but sometimes a community Christmas Party is scheduled.

The current Town Hall building at the Center was built by the WPA help in 1937 replacing a earlier Town Hall on the site which was built in 1873 by John C Johnston, a nearby farmer, architech, county clerk, and early amatuer ballonist. There was a earlier Town Hall which was located on the south west corner lot of Northampton Rd and West Bath Rd. When the new one was planned in 1873 the land was donated by John Best Jr., owner of the farm which is now owned by the city of Cuyahoga Falls and known as Keyser Park.

source:The Story of Northampton Township, the sequicentennial publication of 1970. And the Highpoint March/April 2008 publication of the Summit County Chapter of the Ohio Genealogical Society. 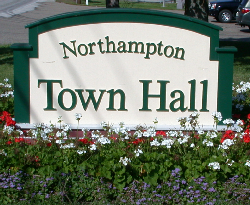 Close
Help us to Preserve our Heritage